Nova Cygni 2014 has been behaving in an interesting way; overlayed on the general rise to max and decrease after max, are variations with an amplitude big enough to be prominent in visual observations. 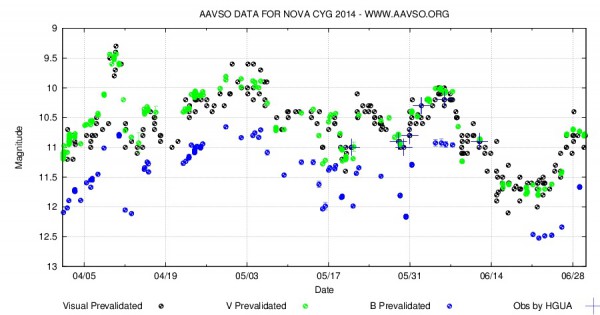 Observations of Nova Cyg 2014 from the AAVSO archive

I have observed the nova a number of times, using the 90 mm Maksutov-Cassegrain. It is easy to find, with star hopping-friendly asterisms nearby. It is the third nova I’ve observed recently, the other two being Nova Cep 2014 and Nova Del 2013, also known as V0339 Del.
This entry was posted in Uncategorized and tagged Nova Cyg 2014, novae. Bookmark the permalink.