The discovery and observation of variables are sometimes the byproducts of astronomical projects and instruments doing other things. Current examples include the Kepler and CoRot missions.

Hipparcos, the very successful European space astrometry telescope, also measured photometry, and it found many variables, 11 597 to be precise, of which more than 8000 were new discoveries.

One of the variables measured by Hipparcos was V370 And. It is a rather bright star, and therefore it was early on recommended that amateur astronomers take up the star on their observing programmes and astronomers check the platestacks at observatories with histories of sky patrol programmes. This star merited further observations.1

Said and done. After Hoffleit’s and Lee’s plea for more observations of V370 And, the AAVSO data archive contains a number of observations, and German amateurs observing visually found variations between 7.4-7.8 with periods around 120 and/or 240 days, about similar to what the Hipparcos data showed.2 Photoelectric measurements in the winter of 1992-1993 do not, it seems, support a period around 230-240 days.3
Analysis of historical photographical archives found variations with an amplitude of 0.5.4

The Hipparcos data shows an excursion, making the total amplitude in the available data, so far, 6.85-8.05 V. Not only is the excursion event present in several Hipparcos measurements around 2448600, but a similar bright excursion is found in the photographic material as well.5

The star was recently placed in the highest priority category in a paper recommending which semiregulars to observe.6 The last two years, only few observations were, however, recorded in the AAVSO archive, but maybe Percy’s and Terziev’s recommendation might change that: 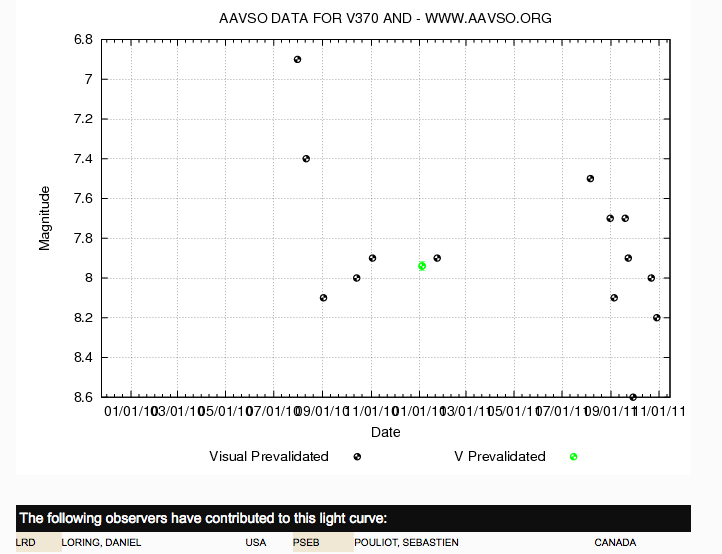 Observations of V370 And since the beginning of 2010 in AAVSO:s database

Long term monitoring of this bright variable could be a worthwhile observing project, well within the reach of small-scale equipment.

This entry was posted in Uncategorized and tagged And, Otero, semiregulars, V370 And. Bookmark the permalink.